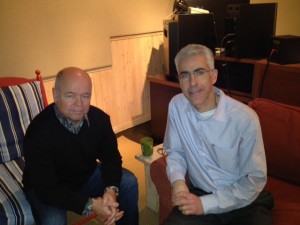 Award winning advertising and marketing expert, Terry O’Reilly, author of « The Age of Persuasion: How Marketing Ate Our Culture, » and host of « Under the Influence » on national CBC radio joined me on Career Buzz radio recently (pictured together) for a feature conversation. In this exciting hour of radio, Terry shared ideas and stories about:

A key turning point: « I had five years under my belt and I was still considered green. One day I put my hand up in [an important client] meeting and said, ‘I feel differently, and let me take you though my thinking.’ The creative director looked at me and said, ‘I agree.’ And the whole room switched around to my point of view. In that moment, my career changed. I was given incredible opportunities by the creative director. It was the first time I had the courage to listen to my inner voice. »

CareerCycles Tip: Notice that Terry didn’t just disagree, he was able to take people through his thinking. So, next time that moment arrives for you, at work or anywhere else, and you want to speak up and be heard, think about Terry’s story.

Terry O’Reilly is also a hiring manager as co-founder of Pirate Radio & Television, a creative audio production company. Pirate has a staff of 50, with 8 recording studios in Toronto and New York City. When I asked him what attracts his attention when it comes to hiring, he said, « I love a beautifully written letter that really states someone’s point of view in a fresh and compelling way. I want to hear, ‘Dear Terry, I want to tell you a story…’ and then take me somewhere. At the end of that letter my reaction is, ‘Get this kid in tomorrow.’ And that’s happened. » For the record, Terry reads the cover letter before looking at a resume.

CareerCycles Tip: Invest the time to write a « beautiful letter » next time you reach out to a prospective employer. Terry also likes a handwritten letter, delivered by snail mail. He « would rip it open immediately, you never get that anymore. »

Do listen to the whole interview because starting at minute 22:00 Terry responds to questions about what the career field itself can do to shape up its image and market itself better.

What do you think about Terry’s story and ideas? Leave a comment!