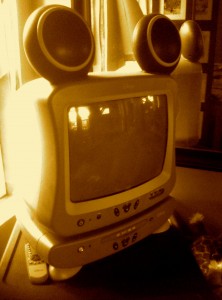 In the early 1950‘s, the objective of children’s programming was originally to provide content to entertain children on Saturday mornings. Today, while children’s programming continues to be a source of entertainment, it has evolved to become an educational resource for facilitating literacy, developing imagination, cultural awareness, scientific quandaries, mathematical problems, and social aptitude.

It’s important that parents monitor a child’s viewing habits, because they may, or may not, approve of the messages being broadcasted. A child is like a sponge, they soak up every single minuet message being broadcasted in front of them.   Moreover, children should not be made responsible for monitoring their own viewing habits, rather a parent should play an active role in their child’s viewing intake.  Not unlike nutritional intakes, younger children will digest whatever is placed in front of them.

As a parent, purposefully set aside sometime to view programming intended for the eyes, ears, and mind of your child.   Know not only the characters, but the messages being broadcasted.  It is your responsibility to act as an advocate for your child’s rights and safety.

Be certain that your child is watching age appropriate programming. Children who watch programming not intended for their age parameters, have a higher likelihood developing a number of psychological conditions, symptoms, and issues.

Do not be afraid of discussing your child’s viewing habits with them.  “Encouraging adolescents to express their opinions and to analyze and question television content is a parental strategy that has been found to reduce adolescents’ fears and aggressiveness, as well as to improve their critical approach to the medium (television).”  (Josephson, 1995)

2.)        Does your child have free reign over the television remote?

4.)        Are you partaking of countless hours of television? Or, are you limiting the amount of  television consumed within your home?

6.)        Has your child developed a routine of chores, homework, play, and free-time?  Children need order, routines, and structure.  It is important that you embed these ideas    into their lives at an early age, or they will find it difficult to adapt them later in life.

7.)        Did you know that parental rules can influence a child’s viewing experience?

8.)        Are you spending adequate time as a family unit, beyond your television viewing habits?

10.)      Does your child have access to a television in his/her room? Did you know that sleep patterns can be disturbed for children who leave their monitors on while they rest? (Johnson, Cohen, et. al, 2004)

11.)      Did you know that an overabundance of television viewing can lead to lowered ambitions, concentration, and overall goal oriented traits?

12.)      Did you know that “the average child who watches 2 hours of cartoons a day may see nearly 10,000 violent incidents each year, of which the researchers estimate that at least 500 pose a high risk for learning and imitating aggression and becoming desensitized to violence.” (Kaiser Family, 2011)

13.)      Did you know that “…your child is ready to communicate from birth (?) Their brain is developing rapidly and they will amaze you with how quickly they learn and grow.” (Words for Life, 2011) Therefore, it is important that you consider what your child’s brain is absorbing.

14.)      Were you aware that behavioral problems can ensue because of too much television viewing?  Research has shown that “elementary students who spend more than two hours a day watching TV or using a computer are more likely to have emotional, social and attention problems.  Exposure to video games also increases the risk of attention problems in children. Children who watch excessive amounts of TV are more likely to bully than children who don’t.” (MayoClinic, 2011)

Research has shown varying results concerning the benefits and disadvantages of television viewing amongst children. A difficulty for some working parents is to find the time to spend simply playing and snuggling their child.   For newborns this is an essential time of development, because at this stage of life; roughly between the ages of birth and 5, a child is thriving for affection.  If a child is incapable of bonding with his or her parents, this child will have a greater probability of developing an attachment disorder.

American Academy of Pediatrics (2011) have suggested that Pediatricians should urge parents to avoid television viewing for children under the age of 2 years. Although certain television programs may be promoted to this age group, research on early brain development shows that babies and toddlers have a critical need for direct interactions with parents and other significant caregivers for healthy brain growth and the development of appropriate social, emotional, and cognitive skills.

Other research has shown favorability of educational programming such as PBS Kids; Sesame Street; Mr. Rogers; Bill Nye the Science Guy; Discovery; A&E; and many more.

Through the medium of television, children can learn many positive life lessons, ethics, and moral insights. It can prove an educational catalyst helping stimulate a child’s imagination and creativity. It can engage discussions of diversity, acceptance, and self-worth.

When commercial free programming is in place, children avoid being bombarded by the countless commercials that feed commercialism and the frequent overwhelming urge to obtain the right toys, clothes, or gadgets.

While television has proven a nemesis unto the family unit; it has offered the family an opportunity to communicate, if-and-only-if, the family delegates the time and effort.

In the end, it’s about balance: a balance of time, thoughts, input and output.  Children should not be exposed to the woes of this world (i.e. September 11, 2011; Madrid 2004) through some forum on television. Rather if-and-only-if, you as a parent feel it is necessary, then-and-only-then, should you consider the depth with which you discuss this matter with your children.  Do not forget to discuss matters that are uplifting and joyful.  The emphasis here is balance. Life is about balance.

Josephson, W. L. (1995) Television violence: A review of the effects on children of different ages. Retrieved. September 10, 2011, from http://www.tinyurl.com/6ba5ewd