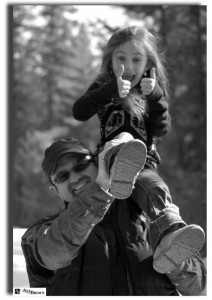 Children thrive upon play.  As a toddler, we mimic our parents, our siblings, our pets, the television, and many other significant participants in our lives.  As a child, we are in a perpetual learning curve, constantly seeking to be stimulated.  Fostering a need for such stimulation begins within the home.  As parents, we are the consummate role model.  We are the creative instigator of their developing minds.

Creativity is the freest form of self-expression and, for children, the creative process is more important than the finished product. There is nothing more fulfilling for children than to be able to express themselves freely. The ability to be creative can do much to nurture your children’s emotional health. All children need to be creative is the freedom to commit themselves to the effort and make whatever activity they are doing their own.

BENEFITS OF PLAY FOR THE PARENT

As parents we are often caught in the hustle and bustle of the importance of our own lives.  In general, our society has become plagued with an unrelenting motion of doing, rarely giving way to kindness or compassion or living life to its fullest.

When was the last time you actively exercised your creative mind?  When was the last time you allowed yourself to imagine as a child does? As adults, we are told that we are to “to put away the childish ways of life.” If we asked another adult to play Peek-a-boo, Simon Says, Hopscotch, or Tag, they would most likely snarl at our ridiculous request.  Why? Don’t you know that we are adults and we are suppose to act as an adult?

When is the last time you asked your child to play hide-and-go-seek? You may thinking, Are you ridiculous, I am an adult and I don’t play such games anymore? After all, such games are for children!

In the 1991 classic movie, Hook; a story inspired by the Peter Pan Tales; Actor Robin Williams plays the role of Peter Banning a grown up acquisitions lawyer who has lost the magic of being Peter Pan.  Sadly, Peter Banning no longer recalls his days as the boy Peter Pan.  Nor does he recall how to harness his inner child.  Thankfully, Peter Banning’s tale does not end as an emotionally broke man, rather Peter Banning gains inspiration from a variety of characters including his own children to once again gain the spirit of Peter Pan.  How does this apply to you? Are you living as Peter Banning or Peter Pan?

Children can inspire the child within us!

If you want to break the cycle of being an adult in all things, then I encourage you to begin actively seeking ways to play.  You need to set your adult mind free of the dos-and-don’ts of our society.  Consider the following exercise:

Go to a mall with friends to play peek-a-boo.  What were people’s verbal responses? What was your perception of their nonverbal language?  How did it feel to be playing            peek-a-boo with someone other than a toddler or infant?  Did you feel embarrassed? Why?  Write about this experience: (Brown, 2010, p. 64)

Parents must purposefully set aside the time to actively interact and play with their children.  When playing with your child, be certain that you are being consciously attentive.  As parents, we know the rules to many games; do not allow your knowledge of the rules to detract from this time of play.  Allow for your child’s imagination to guide this playtime.

BENEFITS OF PLAY FOR THE CHILD

Make your children the point-of-interest, avoid playing games whereby your child is not the center of your attention.  Avoid playing video games or some other electronic devices that may detract from your play time.

Be interactive, communicating your ambitions, goals, and desires for play.  Give your child the reigns to this playtime.  Do not detract by saying, “well this is how the game is played.” Rather, allow your child’s imagination to be front-and-center.  When a child is allowed the freedom to be imaginative, they are encouraged to contextually think “outside the box.”  Research has shown that a child who is granted the freedom of imagination, has a higher probability of being  emotionally and cognitively expressive.

Children who are not granted the right to be imaginative are less likely:  to develop friendships based on social play or to play on their own. When children are not provided the benefits of imagination, they are more likely to be at odds with the personal application of self-soothing and self-comforting .   Children who have a healthy imagination have greater chances of handling stress induced environments.

“Kids can become overwhelmed by their emotions but by using their imaginations, they can master their feelings. If a child is afraid of a monster, he can make up a story about hunting down the monster and scaring it and turning it into something else. He’s found a way to transform it.” (Mandell, 2012, Online)

Research has shown that parents who are actively involved in playful dynamics have a higher likelihood of establishing a positive relationship with their child.  Moreover, the benefits of play for a child are countless, they include:

4.  A boost to a child’s self-esteem, self-worth, and value

5.  Is a building block for a child’s imagination

7.  Children have an increased awareness of their surroundings

The benefits for the parent – child relationship is unity.   In an age that we are frequently overworked, underpaid, and stressed; play decreases our anxieties, our negative thinking, while increasing our own imagination.   Therefore, if we intentionally make play a habitual act in our own lives, then we have a higher likelihood of  being free of our worldly discomforts.

Play is not the only catalyst of good health, but play along with mental and physical care will increase our chances of living a fulfilled life.   In all things, remind your children that you love them unconditionally.

8 comments on “The Importance of Play”