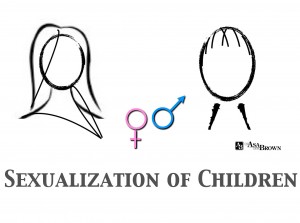 What is a healthy form of sexualization?  Is there such a form?  Is all sexualization inappropriate and unbecoming of our humanity?  When we speak of a healthy sexualization, we are speaking of the awareness and clarification of one’s sex and sexuality.   “It can be hard to acknowledge that all of us, even children, are sexual beings, have sexual feelings and are curious about sex and sexuality. Children’s curiosity can lead to exploring their own and each other’s body parts by looking and touching.” (StopItNow, 2012, Online)

To understand appropriate verses inappropriate sexualization.  We need to understand appropriate verses inappropriate sexual behaviors.  “…There are sexual behaviors about which we should be concerned, (that) are worrisome, and should not be ignored or seen as child’s play. Other sexual behaviors are more serious and may be dangerous to the child and others. …When a child engages in sexual behaviors, it can be difficult to decide when the behavior is natural and healthy, and when it may reflect a problem or disturbance. The normative behaviors of childhood and adolescence are of concern when they are extensive or suggest preoccupation, or involve others in ways that are not consensual. Sexual behaviors in children present a special concern when they appear as prominent features in a child’s life, or when sexual play or behaviors are not welcomed by other children involved in the play. This is the point at which sexually harmful and aggressive behaviors most closely and clearly hinges.” (Rich, 2012, Online)

Other sexual behaviors for young children which are normal, but should be monitored for appropriateness, consistency, frequency, and persistence are:

Sexual behaviors that are abnormal for young children include:

Many times children who display inappropriate sexual behaviors live in homes defined by family dysfunction and high stress. Poor health, crime, and/or violence may be present in the home and disruptive to a child’s normal, healthy sexual development. The American Academy of Pediatrics has found that adult violence in the home is “strongly linked to abuse, neglect, and sexual behavior problems in children.” (Kellogg, 2012, Online)

While the types of sexually appropriate behaviors and knowledge change as the child matures; the primary foundations of appropriateness remain the same throughout the life of a child.  Any child who has a persistent preoccupation with sex, sexual behaviors, sexual acts, or sexual language may be nonverbally communicating a major concern.  It is prudent that all abnormal behaviors be addressed.  Be certain not to be accusatory; do not assume or suggest that someone may have harmed your child.  On the flip side, do not assume that your child’s deviance is acceptable.  Always be certain to address any abnormal or unusual behaviors with a healthcare professional (e.g. counselor, psychotherapist, psychologist).

American Association for Marriage and Family Therapy, AAMFT (2012) When your adolescent acts out sexually. Retrieved December 12, 2012 from http://www.aamft.org/imis15/content/consumer_updates/When_Your_Adolescent_Acts_Out_Sexually.aspx

Department of Education and Children’s Services, DECD (2012) Responding to problem sexual behavior in children and young people; Guidelines for staff in education and care settings. Retrieved December 12, 2012 from http://www.decd.sa.gov.au/docs/documents/1/RespondingtoProblemSexual.pdf

4 comments on “Sexualization of Children”