It started out innocently enough. A teacher asking students to put their phones away and focus on what was happening in the class. One of the students said she felt “anxious” about not having access to her phone.   Other students echoed her sentiment. The teacher was flexible enough to engage in the conversation and ask them to explain.   The conclusion – some students said not being able to text at any given moment or to check their messages left them feeling nervous, anxious, worried. Naturally this concerned the teacher.

Now I don’t mean this to come across as yet another adult shaking her finger at the younger generation and saying they have it all wrong.   When someone says NOT doing something leaves them feeling anxious I think it merits further exploration. 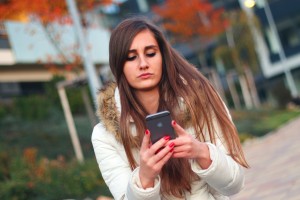 A recent study published in the Psychology of Popular Media Culture journal (http://www.apa.org/pubs/journals/releases/ppm-ppm0000100.pdf) looked at the role “compulsive texting behaviour” plays in students’ academic functioning. The research focused on assessing what counts as “compulsive texting” as well as three components of academic functioning (grades, social bonding and perceived academic competence). While the study was conducted with a relatively small number of Grade 8 & 11 students (n=403) and is based on self-reporting it’s worth having a closer look at their results.

The first step was to create a measure for compulsive texting that is similar to one used for Compulsive Internet Use (Young, K.S. 1998). They wanted to assess for: interference with tasks, cognitive preoccupation and concealment, all potential indicators of compulsivity.   Their research showed a high internal consistency for their Compulsive Texting Scale.

Hmm. Now that is interesting!

The authors go on to speculate about potential explanations for females being more susceptible to compulsive texting behaviour.   They point to research that indicates “females are more likely than males to engage in rumination or obsessive, preoccupied thinking” (see study for details). They also are “more likely to focus their intimacy in interpersonal relationships than males”. Which may mean the content of their texts may be more “distracting or interfering than the texts males receive”.

The researchers discuss the limitations of their study and conclude with a reminder that texting can have potential benefits as well. It’s like anything really – when the use becomes compulsive that’s when we need to find ways to address it.