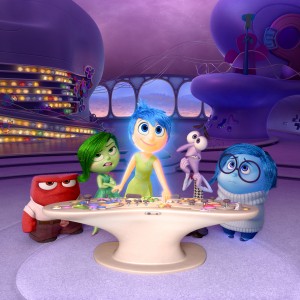 Ever wondered what the little voices in your head look like? Ever wanted to chat with them, tête-à-tête? Well, now you can thanks to Pixar’s new movie “Inside Out” which offers an amazing opportunity to look at our emotions to improve our relationship with them. I enjoyed watching this movie, not only as long-time Pixar fan, but also as a psychotherapist because it presents in a funny and simple way how our emotions impact our lives, keeping a hidden gem until the very end.

To save the movie for those who haven’t seen it yet, I’d just say that “Inside Out” is a story about Riley, a preteen girl facing a change in her life and the emotional journey this change brings into her life. As Ian Phillips says in his Business Insider’s blog, this movie can make a man cry. The movie is full of emotions, sure, but could it also make us think?
Pixar does a great job at putting personalities and faces to five of the basic emotions, showing us how they work inside our brains. I wonder how much this movie will help in removing the stigma that is still tied to “Emotional Intelligence” which sounds like “emotional problems” to some people. I remember a few months ago, while facilitating a workshop on Emotional Intelligence, some people approached me saying things like “I invited a few friends to come but they told me that they had no emotional issues so they need not come.” Have you ever heard statements like that? Have you seen others avoid talking about emotional skills? Do you think a movie can really help to change that?

I see that “Inside Out” offers three major contributions to our psychological well-being. The first one is the idea of a Control Panel, from where the five emotions influence the way Riley behaves. How would our life change if we realized that by taking over the control panel in our brains we can choose which emotion we’ll allow to guide our actions? The second contribution is the “Aha!” moment when Riley realizes what really lies underneath her moodiness. The third contribution Pixar makes to our well-being is to highlight the importance of fully living our emotions (Sadness, Fear, Anger, Disgust, and Joy.) You could be surprised to find out which emotion has the major role in Riley’s healing, giving her insight to accept reality and strength to embrace the new challenge.

Do you remember going through such an intense emotional moment that you couldn’t distinguish what you were actually feeling? Were you able to fully walk all the way through your emotion, like sorrow … until it healed for real and forever? If you’ve watched the movie, do you think that acknowledging the emotions in our hearts can change our life for the better, just as Riley’s?