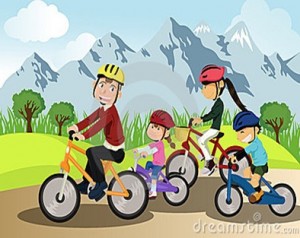 If your kids are anything like mine, then “struggling” is not at ALL what they would describe as a gift: Lego, iPad apps, gum and sour keys, now we’re talking.

Of course like so many things with parenting children, is the “gift” that truly emerges isn’t what they think it will be.

For example, if you think in your own lives, how does it feel when you have been training for your goal this year like running a marathon, cycling the Fondo, mastering headstand in yoga, completing a course you have been slogging away at, or even quitting a nasty habit (you know the one)? Likely you feel proud, strong, accomplished, maybe even a little cocky… I know I would be hard pressed to deny teasing my closest friend as we run together (one in particular who’s name rhymes with “new”).

Essentially, after working hard at something, no matter if it’s physical or mental one tends to feel encouraged from the inside out during the process as well at the finish.

However, this was not the case for my son (6 1/2years old) this weekend, and after 20 minutes nor was it for my daughter (a solid 9). Jesh I almost lost my mind. We had all mutually agreed (ok I mostly nudged them along) to go for a bike ride that would end up at a river near our house, in order to escape the heat. The kicker was, in order to get to the river, we had to endure 2 hills that they would describe as “Everest” like, if they knew such a mountain existed, more likely they would tell you, the hills “were WAY TOO BIG.” So given the size of the hills, I learned that the degree of complaining, correlates in an amazing scientific fashion.

It didn’t start out that way, they both enjoyed the semi-flat slope at the beginning, which if you asked them ended far too quickly, and then the struggle began. Yes, we could have turned around at that point, and it wouldn’t have been the wrong thing at all, but consider what Rudolf Dreikurs (M.D.) say about a struggle:

“Pain is a part of life. There is no way to escape its existence…No parent wants to see his [or her] child suffer. However, there are times when pain is inevitable. The child who is courageous actually suffers less…we must help our children to accept pain and distress. Only if we are impressed with the child’s fear does he [or she] become timid and fearful.”

So despite all the requests to stop climbing, we made it to the river where the pool greeted them with fresh bellowing water to play in, tiny fish swimming about, even a cool water snake was spotted. In minutes everyone was playing, laughing, snacking on wild berries and no one mentioned the horrendous hill….until they gleefully coasted down it home!

0 comments on “The Gift of a Struggle”