“A strong man cannot help a weaker unless the weaker is willing to be helped, and even then the weak man must become strong of himself; he must, by his own efforts, develop the strength which he admires in another. None but himself can alter his condition.”            ~ James Allen 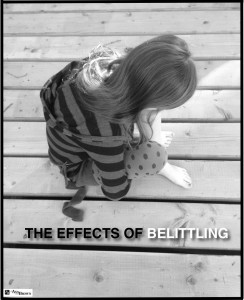 We most commonly associate abuse with sexual and physical deeds.  Rarely do we consider the ramifications that psychological and emotional abuse can have on the life of another.  “It may be the most common kind of child abuse — and the most challenging to deal with. But psychological abuse, or emotional abuse, rarely gets the kind of attention that sexual or physical abuse receives.” (Blue, 2012, Online)

Psychological and emotional abuse are most commonly associated with intentional or grave harm, but psychological and emotional abuse can be as sneaky as a snake.  If you consider the emotional upheaval that occurs within a person’s being when he/she receive a threat, perceive a threat, or vicariously experience a threat; it is as life shattering as being harmed.   A simple threat can accelerate an individual’s desire to find a place of safety and care.  “Keeping a child in a constant state of fear is abuse…” (Blue, 2012, Online) If a child fears being spanked, and/or some other egregious form of punishment, then you create an environment of fear based parenting.

“Childhood abuse may have a range with respect to the degree of severity, intensity, frequency, and longevity endured by a child victim. Abuse can entail ‘physical, emotional, or sexual abuse of children usually by parents, relatives, or caretakers’ (Dorland’s, 2003, p. 8). Abuse may consist of physical maltreatment or language that is belittling, discriminatory, condemning, vilifying, typically uttering statements or words that are personally demeaning; sexual abuse may consist of aggressive behaviors, inappropriate touching or fondling, implied intent of sexual acts, witnessing sexual acts or physical penetration; emotional abuse may consist of the intent to ignore, the intent to corrupt through various acts, isolation, intentional acts of rejection, and terrorizing. Effects of abuse in childhood might consist of the display of aggressive behaviors, an inability to relate or attach to others, establishing inappropriate attachments, an inability to control one’s emotions, commonly displaying mild to severe developmental delay, and/or a significant delay in physiological growth (maturation).” (Brown, 2008, p. 19)

THE EFFECT OF BELITTLING

As children, we derive our personal self-esteem, self-worth, and the very nature of our personhood through those who nurture us.  While nature is a major contributor to our personal temperament and resiliency, it is the vice of nurturing that can sway our internal drives.  For example, if you purchase a computer that is fully functioning; you, as the owner, decide whether or not to surf the internet, download files, create programs, add or remove software or hardware, and a host of other tasks related to the ownership of a computer.  Owning a computer is much like raising a child, although you do not own and/or are you the “master” of a child.  You can add or delete programs, create corrupted files, and intentionally or unintentionally commit deeds that are unintended with the rearing of a child.

What is belittling?  Belittling is the intentional act of making another feel worthless, empty, and dismissed.  It is one of many forms of psychological and emotional abuse.  Belittling another often creates a personal emptiness and void.  It can create a sense of loneliness and despair in the lives of many.  It creates the attitude of “Why should I give a dam, nobody else does?”   When someone belittles another he/she are often trivializing, minimizing, downgrading, running or playing down the personhood of another.  Why does belittling occur?  If a parent is the perpetrator of the act of belittling, he/she may feel insecure, doubtful or lacking confidence in his/her own person.   Thus, the parent sees the child as an extension of his/her own personhood.   In the mind of that insecure parent, he/she perceive that child as a mini-me.  As a mini-me you are incapable of going beyond or achieving successes or failures unimaginable or unattainable to the parent.

Unfortunately, belittling is not only occurring in the home, but it is occurs in the classroom as well.   While the act is committed by another, the rationale or motivation is frequently associated with the same level of insecurities, self-doubts, anger, hostilities, and personal lack of confidence.

THE IMPACT OF BELITTLING

Belittling can have a most egregious impact upon the life of a child.   “Constantly belittling, threatening or ignoring children can be as damaging to their mental health as physical or sexual abuse.” (Goodwin, 2012, Online) The graver issue with belittling is that it leaves no visible or recognizable scars.  “But, with no bruises to spot, pediatricians, teachers, and family members may have trouble recognizing these and other forms of psychological abuse. Not only are there no obvious physical scars, there is no universally agreed-upon definition of what constitutes psychological maltreatment of children, and a fine line can exist between not-so-great parenting and outright abuse…” (Goodwin, 2012, Online).   Regrettably, there are no uniformed codes of being, or conducting oneself, as a parent.    Moreover, it is important to recognize that belittling is not limited to the home, but occurs frequently on the playground and in the classroom.  Do not dismiss where, when, and/or how belittling is fostered; because the effect of belittling can have the same effect no matter where, when, and/or how it is cultivated.   It is most important to recognize that belittling is abuse and it will have a lifelong effect.

RECOGNIZING THE IMPACT OF BELITTLING

Unfortunately, the impact of verbal, emotional, and psychological abuse is most commonly overlooked by parents and professionals.   When a child has been traumatically injected any form of abuse, the immediacy of care is essential.   “For a number of children who are traumatized, the need for receiving care following the trauma often goes unrecognized (Kazak et al., 2004; Phillips et al., 2004) or rejected by the parental caregiver. A minimization of the trauma and its effects is common…” (Brown, 2008, p. 10)  whether it is received from the parental caregiver or a professional, the minimization of certain types of abuse occurs.  Parents and professionals minimize the harm as an act to “…shelter and calm the child. It has been commonly assumed that focusing on children’s issues too long will negatively impact their recovery. Therefore, the parental caregiver teaches the child to mask his or her issues. If the traumatic event goes unchecked, it may allow for the child to develop a host of psychological and medical issues (Allen, 2005; Goldsmith et al., 2004; Phillips et al.) which may eventually relate to how he/she interact with others and perceive him/herself.” (Brown, 2008, p. 10)

The urgency for aid is crucial to the child’s recovery.   If you avoid seeking out aid, the child may harbor resentment.  Likewise, the type of aid may, and will vary, depending upon the type, frequency, longevity, and the overall duration of the event.    Furthermore, it is important to recognize that each child will respond and react differently to abuse.

The greatest challenge for professionals and parents is recognizing the level of abuse or the potential for abuse. Sadly, not all matters are taken seriously, while others are over dramatized, sensationalized or scrutinized.

As parents and professionals, it is necessary that we take all forms of abuse as serious.  If a child is in distress, whether he/she is displaying extreme anxiety, stress, sorrow or pain, we must offer him or her aid.  The immediacy of aid is essential to the recovery efforts.

All forms of abuse are considered maltreatment.  Maltreatment may occur intentionally or unintentionally.  “Psychological maltreatment of children can take many forms. It can include chronically belittling, humiliating or ridiculing a child for showing normal emotions. There is also neglect, such as leaving an infant alone in a crib all day, except for feeding or changing.” (Goodwin, 2012, Online).

The challenge remains that professionals, teachers and parents are at odds when creating a standard definition of abuse.   Consider the following questions:

In our society, the problem with belittling is that we have made it allowable and permissible.  It has permeated our way of thinking.   We have all known a teacher, coach or instructor who has gotten by with belittling his/her students.  It is not uncommon to have known a parent who has called his/her son or daughter a name out of frustration. In fact, we have witnessed it in situational comedies such as “That 70’s Show.” Red Forman was frequently known to call his son, Eric a “dumb ass.”   While the words may seem playful and mischievous in nature; the longterm and often unintended affects can prove harmful to the person receiving the comments.

Acknowledging the impact of all forms, levels, and degrees of abuse is essential.  “Research shows the effects of psychological abuse and neglect can be profound and long-lasting, ranging from problems with brain development and a failure to grow properly, to problems with behavior and relating to others.” (Goodwin, 2012, Online).   If a child’s needs go unmet, the child may live a life struggling to overcome the scars related to his/her abuse.  Furthermore, the same child may be inadequately prepared for the common challenges related to adulthood.

It is imperative that you report any egregious (notably bad) forms of abuse or neglect; whether psychological, emotional, physical, or sexual.  The immediacy of care can and will have a direct impact upon the child’s potential recovery.  If you have a questions or concerns, it is recommended that you consult a professional counselor, psychotherapist, or psychologist with your queries.  Remember, it is about the life of a developing child.

5 comments on “The Effects of Belittling”