“I have decided to stick to love…Hate is too great a burden to bear.”

Webster’s Dictionary (2012) defines hate as an “intense hostility and aversion usually deriving from fear, anger, or sense of injury.  It is an extreme dislike or antipathy (and in most cases, there is) an object of hatred.”

Children who are exposed to hate are prone to a world of disorder, conflict, turmoil, strife, and an array of injustices.  Hate is the catalyst for human depravity and personal decay.  The typical foundations of hate begin in adolescence, they begin to blossom in the early life of a child.  Hate is rarely founded and always based on an indifference between peoples. 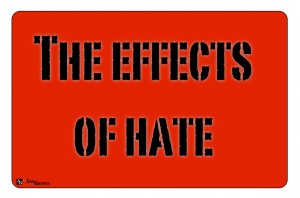 The National Association of Social Workers definition is:  “Hate violence crimes are those directed against persons, families, groups, or organizations because of their racial, ethnic, religious, or sexual identities or their sexual orientation or condition of disability.” (Barnes & Ephross, 2012, Online)

Hate knows no friend; it breaches the wellbeing of both the hated and the hater. Children who are taught to hate, whether implied or through an act of projection, are forced to live lives in constant opposition.   Hate stifles their ability to fully live a life engulfed with love and security.  Hate not only permanently skews their cognitive perceptions of the world, but it causes personal distress leaving a stain on one’s ideological viewpoints of that world.  Fortunately, while the senseless act of hate can have a permanent effect upon the emotional welfare of the individual; those who hate, or are being groomed to hate, can experience lifelong reprieve from the shackles of hate.

Hate’s effect can be passed down through the generations of a family, a community, or a civilization.  It is hate that acts as rust on the human mind and spirit.  Hate slowly causes an oxidation on the natural process of love, peace, and acceptance from within a person.  It is hate that transforms the natural order of the human condition, causing an internal and external strife within the very fabric of humanity.

Hate has caused wars and created rumors of wars; it has pitted children against children and adult against adult; it is hate that allows for teachers to bully their students and student’s to bully one-another.  Hate is often confused with pride, while genuinely positive pride, is “the consciousness of one’s own dignity,” (Webster’s Dictionary, 2012), as well as, having a source of intense approval for one’s achievements and personal successes.  Hate has no relationship to pride.

While hate is the decayer, love and acceptance are the cure.  Hate cannot know the light of the world, rather hate itself is an opponent of darkness.  What does darkness symbolize?  Darkness is the unknowing, the instigator of our greatest fears, the promoter of our worse nightmares, and the master of human dysfunction.   Darkness emphasizes our insecurities, our worries, our negative contemplations, and in general, anything contrary to our positive nature.  Hate in itself cannot force the hand of humankind, rather it entices the worst of the human condition to become the prominent player in one’s overall life.

Overcoming any negative emotion or thought pattern takes deliberate effort.  Children who are either taught or influenced to hate have a greater chance of changing their ideological viewpoints, than someone who has reached adulthood.  Sadly, adults who have hate as the foundation of their personal character; are all too often imprisoned by their hate.  Hate is the ultimate virus, infecting the very essence of the person.  However, hate is not a totalitarian regime, and fortunately because of human resiliency, hate can be overcome.  Overcoming hate starts with the individual.  Through a deliberate and conscious effort on the part of the individual, hate can be eliminated from the mind and very conscious of that individual.

The Steps to Overcoming Hate

When there is hate, a child’s right of safety and care is breached.  Schools should intentionally and purposefully foster an environment of safety and care.  When a school avoids advocating for its children, it extinguishes their individual rights.  It is vital to recognize that “All students are harmed by being in a school environment where discriminatory behavior is allowed, not just those students who are singled out for such harassment and victimization.”  (Wieland, 2007, p. 241)  Children should always be provided an environment of unconditional love, acceptance, and approval.  Remember, what occurs in one’s childhood is often indicative of things to come.   If we avoid addressing messages of hate in childhood, then there is little deterrence for children from amplifying the same messages of hate in their adulthood.

Helping your children to recognize the verbal and nonverbal messages is critical for combating the hate.  Be certain to teach your children to recognize the key features of hateful and violent messages; whether they are communicated verbally or nonverbally; casted disparagingly through stereotypes, stigmas, guilt, or shame; it is essential to know and recognize when other’s are offering us platters of hate.

“What are some general ways that hate speech can be used in the offline (or online) world? Sample responses:

Children who are not taught to recognize the clutches of hate, will often fall prey unto such messages.  As parents and teachers, we are obligated to gird up the loins of our children to protect them from the possibility of harm.  Moreover, it is equally important for children not only be taught to protect themselves, but to play a critical in offering positive lessons unto their classmates.  If so, such children will prove advocates not only for themselves, but for the lives of everyone they encounter.

We must be hyper-vigilant when training our children.  As parents and teachers, we should keep a watchful eye out for danger and difficult times.  It should be expected that teachers and parents use due diligence to protect their children.

Barnes, A. & Ephross, P. H. (2012) The impact of hate violence on victims, Emotional and behavioral responses to attacks.  Retrieved September 22, 2012 from http://www.socialworkers.org/pressroom/events/911/barnes.asp

8 comments on “The Effect of Hate on Children”