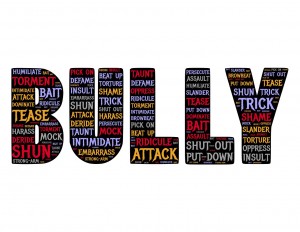 Echo bullying is a term I’ve developed based on both personal and clinical experiences. It is a phenomenon that occurs long after the bullying ends. It is an internal self-depreciation that continually underlies the former victim’s self-perception. The depreciating internal dialogue perpetuates the past bullying (usually sub-consciously). This internal dialogue is the echo of the bully’s message to his former victim.

Bullies direct hurtful comments or behaviours at you, and then you walk away and think nothing more of it or you may even try to repress or distort the memory of it while trying to convince yourself that you don’t care. Truth be told, if you don’t get any reconciliation or some kind of closure from it, especially if it was more than a single incident, the abuse you suffered can come to haunt you long after the abuse itself ended… by your own hands.

As we’ve seen in my series on adult bullying, the bully not only uses his victim as a scapegoat on whom to vent his anger, he also sends the message to his victim that he deserves the abuse. Even though it is a false message, it is unfortunately not uncommon for the victims to question themselves and fear that the message may be true. Then, when something happens that seems to confirm that fear, they can hear the abusive message resound in their head. Then they begin to be disgusted with themselves and try to hide their true selves in different ways (being someone they’re not, shutting family and friends out, isolating themselves from the social scene, etc.). They may even repeat that same message to themselves in various self-depreciating forms. Thus, they perpetuate the bully’s abuse of them.

More could be said on the matter but, in a nutshell, that’s how I understand echo bullying. Agree? Disagree?