There are many trauma therapies that focus on the body such as sensorimotor therapy and EMDR. Exercise itself is a healing modality for depression, anxiety, stress and especially trauma. Many therapists may turn towards CBT or exposure therapy or another form of psychotherapy, forgetting that the body may be a source of healing. I specifically want to talk about the effects of yoga on trauma as this is a great trauma tool to encourage clients to engage in. Yoga therapy has been understudied; however, has been shown to be an effective adjunct treatment for psychiatric disorders (Cabral et al.,)

Trauma and its effects on the body cause disregulation. In PTSD, the fight or flight system is broken causing prolonged symptoms of re-experiencing, avoidance and hyperarousal. Hyperarousal symptoms are the main embodiment of the physical symptoms within the body of a PTSD client. Clients may feel easily startled, hold tension within their bodies and have difficulty sleeping and exhibit angry outbursts (nimh.com). The body will hold onto that tension and not be able to regulate back to a calm state compared to someone who does not have PTSD.

Yoga has many physical benefits, one of which is retraining the body to be calm. The National Institutes of Health Center for Complementary and Alternative Medicine defines mind-body interventions as “a variety of techniques designed to enhance the mind’s capacity to affect bodily function and symptoms.”Yoga practice enhances the connection between the mind and body, and it is used as a therapeutic intervention in a variety of diseases. The mechanisms that allow for the potential therapeutic effects of yoga involve the autonomic nervous system, especially a reduction in sympathetic tone, as well as activation of antagonistic neuromuscular systems and stimulation of the limbic system (Cabral et al.,) 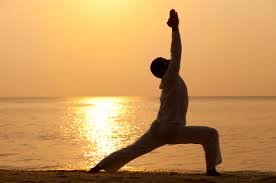 In as little as 90 seconds of deep, diaphragmatic breathing, you can initiate your parasympathetic nervous system (a component of the autonomic nervous system), which shuts down the stress response by lowering cortisol (stress hormone), blood pressure and heart rate while increasing oxytocin and endorphins (happy hormones) (CNN.com). A 2010 Harvard Study on “power posing” in yoga showed that holding open-body postures for two minutes decreases cortisol and increases testosterone, a confidence-boosting hormone, for less anxiety and more self-assuredness (CNN.com) Yoga breathing (pranayama) requires a person to inhale deeply throught the nose into the lungs and exhale through the mouth. Yoga breathing is probably one of the most important components in yoga for treatment in PTSD as it enduces a calm state by activating the parasympathetic drive, calming of the stress response systems, and the reduction of the neuroendocrine release of hormones such as cortisol(Cabral et al.,). In recent years, the US government, the National Institutes of Health and the US military have turned to complementary and alternative medicine, especially yoga, for treatment of anxiety and PTSD (Cabral et al.,). Yoga also consists of holding various physical postures, meditation, alignment, flexibility and chanting. Meditation has been shown in some studies to increase dopamine levels, (Cabral et al.,)

In PTSD, clients did not have a choice in wanting to be traumatized. Yoga gives PTSD clients back a sense of agency or empowerment, a choice in how they can move in yoga class through the postures and at their own pace. I have been to many classes and many instructors will encourage you to move at your own pace and to move in a way that makes you feel good. Yoga also helps clients develop socially in a community. There are specific PTSD yoga classes in some cities. If there are not, perhaps this is a project that can be initiated in your city with a qualified instructor at the helm who knows about PTSD symptoms. In one study, Yoga surpassed DBT in PTSD reduction of symptoms (Emerson et al., 2009). There is still a requirement for ongoing research into Yoga’s short term and long term effects as a treatment modality for PTSD. However, it an adjunctive tool to psychotherapy that psychotherapists/counsellors can encourage clients to try to self regulate and alleviate their PTSD symptoms.

Andrea Cashman is a registered psychotherapist in private practice who has founded Holistic Counselling Services for individual clients seeking therapy in Ottawa, Ontario. She also practices at The Ottawa Hospital as a registered nurse. Feel free to comment below or contact her at [email protected] or visit her website at www.holisticcounsellingservices.ca

4 comments on “Yoga as a Form of Trauma Therapy”