What would you do?

In the past few months, I have enjoyed watching the show, “What would you do?” with John Quinones of ABC News.  I have benefitted from watching Mr. Quinones approach to querying a host of ethical, moral, legal, and life questions.  His show has reengaged many of my own questions on life, as well as, creating new questions for me to ponder.  In this article, I will be using John Quinones line of questioning and theoretical approach, to asking the tough questions.

What Would You Do, if you were privy to the knowledge of a child being harmed? 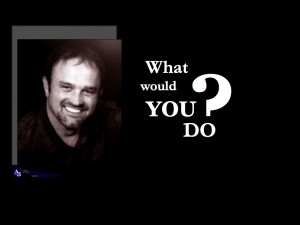 In my practice, I have sadly received the egregious reports that a child has been intentionally harmed.  I have received these reports directly from the lips of those being abused, as well as, through those who have either witnessed or been informed of the abuse.  Unfortunately, the authorities will not pursue legal action against “all” types of abuse.  As a therapist, this can drive you mad when you recognize how your client-patient is being negatively impacted by the abuse.  Furthermore, as a therapist you want your client-patient to feel safe, secure, and capable of reaching out for help; but when the abuser is capable of winning through the legal authorities’ incompetencies, or through the restraints placed on the authority, you become like the mad hatter seeking ways to positively influence the authorities’ decisions.

How do we define abuse? What is abuse? Are not many forms of abuse subjective?  Indeed, many forms of abuse are subjectively influenced, so how do we come to an agreeable definition, when the definition of abuse is in the eye of the beholder? The characteristics of abuse can be defined as maltreatment, neglect, repression, oppression, subjection, or any form of cruelty intentional or unintentional.  Abuse does not stop with direct solicitation, it can be experienced on a vicarious level or through indirect experiences.  Abuse can target an individual on a barrage of emotional, financial, sexual, physical, or psychological experiences.

Should not all forms of abuse be taken serious? If so, then how can we create a barometer of abuse that will be universally accepted? As a therapist, I have reported blatant acts of abuse, only to have a legal representative deny my client’s rights to safety.  Furthermore, it is not only abuse that gets rejected, but many acts of violence that have potential harm. Several years ago, I had an experience whereby I unfortunately had to report an individual as having homicidal ideation. Following my preliminary diagnosis, I made contact with the Royal Canadian Mounted Police (RCMP)informing them of this diagnostic impression. The RCMP apprehended the individual taking this person to the local emergency room; only to have the attending emergency physician deny my preliminary diagnosis, thus, sending the individual home.  Ironically, my wife would receive a call the very next day from the RCMP informing her that this individual was indeed displaying signs of homicidal ideation. In fact, the RCMP were alerted by an informant, that my name had been added to this individual’s hit list.  Notably, no one person is perfect, nor will our “calls” on a potential victimizer always be accurate, but it is critically important that we always follow our diagnostic impressions.  It is never wrong to request a professional consultation on a diagnostic impression.

As therapists, we are called to be diligent with our diagnostic and clinical impressions. I beseech you to consider, if a child of any age is making accusations, to earnestly consider the breadth of his or her claim.  Remember, we have a solemn duty to warn, to protect, and report not only accusations and allegations of abuse, but suspicions and impressions of abuse and neglect involving children of any age.

Abuse is the catalyst that precipitates or engages a negative act or experience on the life of another. Abuse may not always be perpetuated by an intentional victimizer, sometimes abuse can be employed by ignorance of a negative act or deed.  It is important that we not cast stones at an abuser, especially if an abuser has been trained to think that a particular abusive act is “normal”.  Moreover, if the abuser has been unintentionally offering abusive acts, should we not consider what would be in the best interest of the child, rather than permanently removing the child from their home?  However, this is where we are drawn to a crossroads, because now we have to define; was this parental figure aware of their abusive act or unaware. Is the abusive act ethically and morally reprehensible? Or, is the act capable of receiving some social justification based on an overall acceptability of the act (i.e. many forms of corporal punishment, verbal abuse. etc.)? If you consider many mainstream movies, artists, and television programs; abusive acts have been normalized in our social consciousness.  Therefore, if abuse has been normalized, how do we begin to redefine, establish, and draw sound parameters around what is abusive?  We cannot allow ignorance to be the escape goat? We must hold individuals accountable of their abusive acts, while seeking gentle methods to retrain them on a path that is positively productive. We can not merely end with the definition of abuse, we must diligently seek to eliminate abuse from the lives of all children.

What Would You Do… if you were privy to the knowledge of a child being harmed?