“The whole history of science has been the gradual realization that events do not happen in an arbitrary manner, but that they reflect a certain underlying order, which may or may not be divinely inspired.”
~ Stephen Hawking 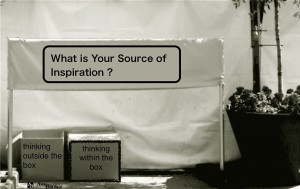 WHAT DOES IT MEAN TO BE INSPIRED?

“When I’m inspired, I get excited because I can’t wait to see what I’ll come up with next.”
~ Dolly Parton

When we are inspired, we are motivated to accomplish something in life.  We have an urging or a draw that tugs at our hearts, souls, and minds.  Inspiration fuels a person’s creativity, inventiveness, and imagination.  An inspired individual asks of life, “What is next?”  Inspired people do not give up, rather they are encouraged by the challenges that life frequently presents.

How do inspired people prove resilient in spite of the obstacles they may face?  “Recent research is bearing that… simple forms of mindfulness meditation actually do facilitate recovery from adversity and thus promote a greater resilience style, and change the brain circuits that are associated with resilience in ways that we would predict.” (Winerman, 2012, p. 30)  Meditation, breathing, a purposeful focus, and an internal drive towards improvement

“I’m inspired by people who keep on rolling, no matter their age.”   ~ Jimmy Buffett

People maybe inspired to prove personally resilient at varying times throughout their life.  The movie, Here Comes The Boom, is the portrayal of a 42-year-old high school biology teacher, Scott Voss, (played by Actor Kevin James).  As a teacher, Scott learns of the financial hardship that his school is facing and the probable cutbacks that will affect the various elective programs.  As a result, Scott chooses to come to the aid of his school’s financial woes.  As a teacher, citizenship coach, and general good guy, Scott Voss seeks various tools to bring financial aid to the cash-strapped school.  Despite all of his hard work, Scott finds himself barely making a dent in the financial challenges.  Reflecting back on his own school training as a wrestler and his recent viewing of a UFC (Ultimate Fighting Championship) fight; Scott decides to pursue the UFC.  Combining his own high school wrestling maneuvers with the aid of martial art fighters and coaches, Scott achieves his ambition of becoming a UFC Champion.

Why is it that Scott Voss could prove resilient in the face of the ultimate physical challenge?  Was Scott’s training as a high school student in wrestling his secret weapon?  When people are faced with challenges, trials, or tribulations; they are forced to face their ultimate potential.

“Character cannot be developed in ease and quiet.  Only through experience of trial and suffering can the soul be strengthened, ambition inspired, and success achieved.”   ~ Helen Keller

Challenges, tribulations and trials strengthen our resolve.  Benjamin Franklin was quoted as saying, “Resolve to perform what you ought; perform without fail what you resolve.”  It is the application of need; need to survive, need to thrive, and the need to prove an overcomer, that is often the catalyst that helps us to prove resilient in the face of hardships and life challenges.

“It is good to love many things, for therein lies the true strength, and whosoever loves much performs much, and can accomplish much, and what is done in love is well done.”
~ Vincent van Gogh

Inspiration is the primary tool of resiliency.  If we are resilient, we can overcome obstacles, challenges, trials and tribulations.  Inspiration helps us to modify our negative features into positive.  An inspired individual seeks to achieve, to attain, and accomplish or bring out the best in themselves and others.  An inspired individual may or may not have been encouraged to prove personally resilient by another.  In some cases, it is solely our personal temperament that fuels our inspiration and it is the motivator causing us to prove resilient.

Fueling another’s inspiration is achieved through encouragement, coaxing, motivating, and persuading another to be their very best.  Inspiring another may be achieved through personal modeling of inspired living or through the pep talk and morale-boosting communications.

Inspiration cannot be forced on another.  Even if, you are offering encouragement and inspirational communications; not everyone chooses to prove personally resilient.  Choosing to prove resilient is our personal obligation.  I cannot make anyone person prove resilient or be divinely inspired.  If you want more from this life, you must choose to prove an overcomer and a conquerer.  It is through the girding of one’s loins that an individual will prove their ultimate best.

A real life example of someone choosing to prove resilient is the story of Michael Oehr, a football player with the Baltimore Ravens.  Born in Memphis, Tennessee, Michael was one of twelve children to Denise Oher.  His mother was an alcoholic and crack cocaine addict, and his father, Michael Jerome Williams, was frequently in prison.  Due to his upbringing, he received little attention and discipline during his childhood.  He repeated both first and second grades, and attended eleven different schools during his first nine years as a student.  He was placed in foster care at age seven, and alternated between living in various foster homes and periods of homelessness.  Oher’s biological father was a former cell mate of Denise Oher’s brother and was murdered in prison when Oher was a senior in high school.  In 2004, Leigh Anne and Sean Tuohy, a couple with a daughter and son attending the same school Michael was attending, allowed him to live with them and eventually adopted him.  The family began tending to his needs after becoming familiar with his difficult childhood.  They also hired a tutor for him, who worked with him for twenty hours per week.  He finally emerged as a strong defense football player and the rest is history.

When interviewed on CNN about a year ago, Michael was asked if his life would have been different without the help of his adoptive family.  Michael’s answer was unequivocal.  He said that it may have taken a bit longer but he was going to get where he is now anyways.  He had made the decision to remove himself from the vicious cycle of desperation that all of his family and friends were riding and continue to ride, and he succeeded.  At 26, he has become a role model by simply being true to his personal commitment.  He also decided to share his experience for the benefit of others and wrote a book entitled, “I Beat the Odds: From Homelessness to the Blind Side, and Beyond” which has inspired so many.

Choosing to prove resilient will develop a healthy perspective of one’s self, of one’s abilities, and one’s personal resolve, which will help an individual to prove personally inspired.  Becoming inspired does not occur overnight, but it will occur in time, along with a healthy balance of perseverance, patience, and persistence.  As you become inspired, you move forward despite life’s difficulties, trials, and tribulations.

3 comments on “What is Your Source of Inspiration?”