Over the last 2 years as I have delved deeper into virtual reality (VR) I have learned things I never expected to experience. The fact that VR is programmable means that the experience is solely dependent on ones imagination (and perhaps a little aptitude for software development). VR transports you immediately into a new reality and this holds many implications. The truth is that the physical body, or meat space, does not go anywhere. It is the mind or the psyche that is convincingly transported and the focus of my exploration. This is the true potential for the impact of VR.

I recently received a consumer version VR device. This device not only allows you to glimpse into another world, but also provides you the ability to manipulate the world around you with your hands. In addition, the technology provides the freedom of movement throughout a play area where you can walk around, sit, dance, pivot, the full range of bodily motions as long as it is within the bounds of a play area. This transforms ones understanding of the lived experiences almost 100% from the meat space into a digital realm. When you can train your aim inside an archery simulation and the fidelity nearly reflects reality, it is a strange experience indeed. I have never done archery myself, but being able to have some measure of behavioural mimicry to archery was not only a fun experience, but immersive and tiring! Having to duck and dodge enemy fire, destroying enemies with accurate aim, and spinning around at a second’s notice to ensure no one was attacking you from behind was thrilling. To imagine that this is the new world of the gamer, no longer bound to a computer chair, but sweating instead in a dimly lit room, practicing proper aim that can maybe be carrie 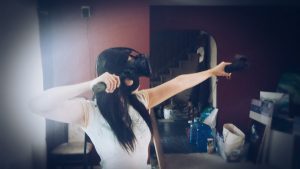 d into the real world. On the score board, your abilities are compared against the best in the world and usernames compete in a never ending battle to the top rank.

I also experienced an amazing level of intimacy in VR. Coming headset to headset with other people around the world, playing games and chatting with them through mics was absolutely astounding. I could see their heads move about as they thought about the ideas I shared with them. People witnessed my hands held on my hips as I wait for them to take the next shot at pool. We giggled together as we threw chairs all around a digital bar and made a mess with beer bottles and books. I high fived someone from Germany, we chatted about what a strange experience VR was, we looked at each other’s computer screens to check time zone differences between me and someone from Illinois, and goofed around with the interface as we learned and tinkered with our new toys. I was approached by a Frenchman from Austria that even wanted to show me around the digital space while I practiced my French. We spent time with phantom others in our minds, while our bodies remained alone and without company, yet I felt connected online for the very first time. I have made several friends already from around the world.

Does the mind care that you are not physically next to a person? No. I can say for myself that my mind was thoroughly convinced that I was properly socializing with others beside me, sharing and laughing together in a room. Meeting with strangers was no more jarring than in person, and in earnest, less so because all my fears of judgment vanished with the replacement of my body as an avatar. However, my expression, who “I” was did not vanish, and was perhaps enhanced by the removal of my distracting physical self.