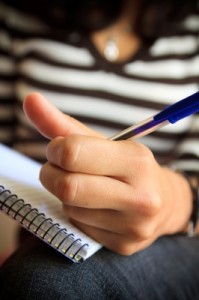 Journaling has become synonymous with counselling and psychotherapy. It is frequently associated with therapeutic processes and outcomes such as increased self-awareness, exploration, consideration of alternatives, problem-solving, emotional release, and an enhanced sense of self (giving voice to one’s life narrative and experiences). There are, however, a few key considerations for clients and counsellors/ psychotherapists to keep in mind when deciding whether or not journaling would be helpful.

Reflective journaling in the context of depression may not be helpful, especially at the outset of counselling when activity-based interventions are important to interrupt the cyclical nature of depression. On the one hand, researchers (Lyubomirsky & Nolen-Hoeksema, 1995; Nolen-Hoeksema, Wisco, & Lyubomirsky, 2008) have implicated reflection as an ineffective intervention for depression given its potential to invite and/or contribute to rumination. On the other hand, in the context of therapy, reflective learning has been linked to increasing active participation and motivation to seek insight into problems (Karlsson & Kermott, 2006).

Research (Nolen-Hoeksema, Parker, & Larson, 1994; Torges, Stewart, & Nolen-Hoeksema, 2008) has reported that rumination can hinder adaptation, especially to loss and regrets. Excessive rumination can block action and create a sense of feeling stuck with presenting challenges. Focusing too much on problems in the absence of shifting gears toward thinking about potential alternatives and solutions may perpetuate feeling overwhelmed and hopeless that change is possible. At the same time, though, processing emotion also helps work through depression (Greenberg & Watson, 2006; Hunt, 1998).

These various perspectives suggest that reflective journaling with a specific focus, incorporated with behaviour-based activities, has a role in the treatment of depression. For example, a time-limited journaling exercise designed to better understand factors contributing to depression might help generate ideas for next steps in treatment planning. In this case, journaling takes a turn toward being a problem-solving tool. The decision of when to incorporate journaling and its role in the treatment of depression exemplifies the need for collaborative conversations between clients and counsellors. One size does not fit all in therapy. The timing and intent of journaling in concert with individual differences in the onset and course of depression are important considerations to determine if journaling is compatible with the depression an individual is experiencing.

The views expressed are mine alone and do not reflect the views of the CCPA. Dr. Debbie Grove is a therapist working in Edmonton, Alberta. To learn more about her, visit her web site at www.learningtolive.ca