This above all, – to thine own self be true;
And it must follow, as the night the day,
Thou canst not then be false to any man.
~ William Shakespeare, Hamlet 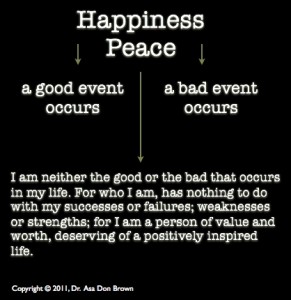 Life is too short to be what others might expect you to be. Do not be afraid to be your own person, to express your ideas, to have faith, to believe in liberty because no one has a right to dictate your life. You are an individual uniquely inspired and worthy of a right to individuality.

Children, youth, and adults struggle with the concept of being true unto themselves. We live in a society plagued with ideological stereotypes, pigeonholing, typecasting, conventionalizing, categorizing, labeling, and imaging.  If-and-only-if, you pledge yourself to a brand, an image, a label, the right cliche, the right clothes, or the right genre, then-and-only-then, will you prove acceptable.  Children are bombarded by what is right, what is wrong, what is fashionable, and what is unfashionable. When does this madness end and the sanity begin?

Socrates philosophical viewpoints sought to deliver thy person from personal bondage. In his philosophy, we learn that if we are to “know thyself to be wise…,” then we must examine our lives fully, accepting the acceptable and changing that which needs changing.

Why should we teach children to be true themselves? What good comes from examining thy personal needs, desires, wants, and dreams? Why not teach a child to simply go with the flow of life?  After all, resistance is the cause of many problems in life.  Why not live a life of ignorance and bliss?

When we teach children to simply go with the flow, we are teaching them to simply follow paths with which they may not desire to go.  It is never right for someone to pose an opposition to something merely to be different, rather any opposition should come from thine heart, mind, and spirit.  An opposing idea, concept, or life should have a purpose and positive direction.  The oppositional personality should have a deep desire to express their own individuality.  If a child is forcibly molded to be like somebody other than their own person, then they will either resent or resist the molding.

Abraham Maslow’s Hierarchy of Needs describes this need to be true to thine self as self-actualization.

What a man can be, he must be. This need we may call self-actualization…It refers to the  desire for self-fulfillment, namely, to the tendency for him to become actualized in what he is potentially. This tendency might be phrased as the desire to become more and more  what one is, to become everything that one is capable of becoming.

If I limit my child’s ambitions, then I am forcibly informing my child that they can only be what I envision.  If I tell my child that they cannot become an astronaut, a physician, an artist, a philosopher, an author, or any other ambition; then I am in essence declaring they are only capable of becoming what I envision.  You might be saying unto yourself; my child is not gifted, capable, or able to pursue his or her desires. Consider the following:  What if, Professor Stephen Hawking had been forcibly redirected from pursuing his desires based on his physical limitations? Many of today’s academic communities would be at a loss without the breadth of his dynamic knowledge. Furthermore, what if Sir Richard Branson had been limited based on his dyslexia? The world would have experienced losses spanning from the leisure, travel, tourism, mobile, broadband, television, radio, music festivals, finance and health.

What does it mean to know thyself, or to be true to thyself? While there are a variety of philosophical slants, in simple, it means to follow one’s heart, desires, intentions, goals, and quests. Frederick Neitzsche described it as “… (the) one thing (that) is needful: that a human being should attain satisfaction with himself… only then is a human being at all tolerable to behold. Whoever is dissatisfied with himself is continually ready for revenge, and we others will be his victims…” In other words, if a person is swayed from following his or her desires, then they are apt to contain within themselves a heart of resentment.

What if my child fails? Is it not better to have failed, than never having attempted a desire of one’s life? As a society, we need to stop seeing failure as a bad thing. Failure is merely a landmark of a task attempted, no more than success is a landmark of a task achieved.  Moreover, landmarks are simply the place within our lives that we have attempted to live.  “Your life, the essence of your being, is not based on your own successes or failures, nor is it based on the successes or failures of anyone involved directly or indirectly in your life.” (Brown, 2010, p. 19)

Children should be encouraged to pursue their dreams. If you disagree with your child’s choices, ambitions, dreams, or desires, discuss your concerns, but do not place a damper on your child’s internal drive. A child’s flame of desire rarely can be distinguished by a peer, however, a parental figure or teacher can act as an extinguisher nullifying the flame.  Children need you to be their greatest advocate and ally.

If a child fails, encourage them to get up, dust themselves off, and to review their pursuits.  In some cases, failure makes the child aware that they might reconsider the pathway of their pursuits. In other cases, failure ignites the child’s flame of desire, setting it ablaze making the desire a deepened goal of that child.  A child should always be complimented and praised for attempting a pursuit.  A child should never be scolded, made to feel worthless, devalued, pathetic, or incapable.  If a child fails to reach a goal, encourage the child, remembering to compliment the child’s ambition to pursue a particular task.

Finally, “life is a combination of our positive and negative choices.” (Brown, 2010, p. 17)  Whether our choices bring about perceived failure or success, we should always be reassured that our goodness lies within. We need to be the directors of our screenplay called life.  If we are being true unto our own person, then we will pursue the diligence of our heart, mind, and spirit.

Skinner, N., Brewer, N. (2002) The dynamics of threat and challenge appraisals prior to stressful achievements.  Journal of Personality and Social Psychology. 83 (3) 678-92.