“The only real mistake is the one from which we learn nothing.”
~ Henry Ford 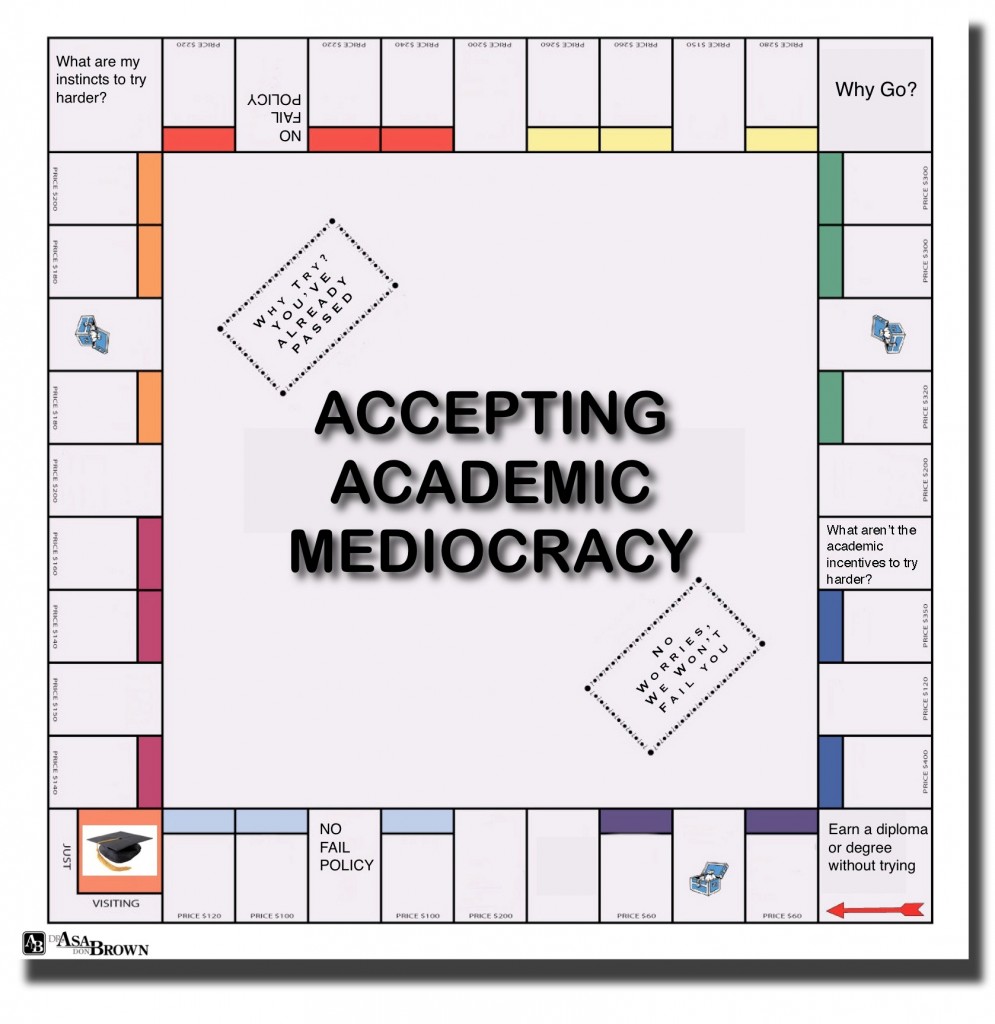 Why has society lowered the ceiling of academic success?  Why have our standards been lowered to ensure the graduation rate of our children?  Are we not dumbing down our society if we lower our academic standards?  Are we not developing a society of mediocracy?  It is mediocracy that encourages a moderate and poor quality of performance. Are we not creating a society that just gets by with good enough.  Good enough is unacceptable.

In many aspects of our society, we no longer encourage children to dream, to thrive, and to achieve; rather we have become a society of mediocracy and complacency.  Furthermore, we rarely seek to inspire, to encourage, to positively influence, or to spark an internal flame.  We have become a society that has given up; accepting the notion that “mediocracy” is acceptable.  I have yet to meet a high achiever who has allowed mediocracy to be an acceptable standard for his/her life.

THE POLITICAL LOWERING OF ACADEMIC STANDARDS

“Every adversity, every failure, every heartache carries with it the seed of an equal or greater benefit.”
~ Napoleon Hill

In the past, having served as a political strategist in Canada, and as a political aide to a representative in the United States; allowed me to peek my eyes through the window of politics.  It was through this window that I began to recognize how very interconnected the political machine was on the academic world.  It has been through my work in politics, that I have had an unique opportunity to see behind the scenes of political evolution of academia.  I would never have dreamt that the political climate of our day, would make acceptable any standard short of being our best.  Many years ago, the United States Army ran an ad that emphasized an ideological approach to “be all that you can be.”  Are we encouraging children of this generation to be all that they can be?  Or, are we encouraging children of this upcoming generation to simply be comfortable with a passing grade?

THE ADMINISTRATIVE AND TEACHING INFLUENCE ON THE LOWERING OF ACADEMIC STANDARDS

“Children have a lesson adults should learn, to not be ashamed of failing, but to get up and try again. Most of us adults are so afraid, so cautious, so ‘safe,’ and therefore so shrinking and rigid and afraid that it is why so many humans fail. Most middle-aged adults have resigned themselves to failure.”
~ Malcolm X

Teachers and administers fear the psychological repercussions that failure may have on the mindset of a child.  The academic establishment is so afraid of failure, that they have approved no-fail policies throughout Canada, the United States and throughout this global community.  The no-fail policy is an epidemic of colossal proportions.  It is this fear of failure that creates an avoidance of the truth, placing an emphasis on lies, fabrications, deception, and falsification.

Frustratingly, I have encountered secondary educational institutions that have a “no fail policy.” While the notion of a no-fail policy is generous in it’s intentions; it is denying children the privilege of failure.  Failure and success are synonymous with their intent.  When we fail, we create an open doorway for improvement, growth, and maturity; but only if we choose to allow our failure to prove a teaching tool.  Furthermore, if we succeed, we have an opportunity to develop beyond our successes or achievement.   We should never settle for mediocracy.

Teachers have informed me that they fear that children will identify with their failure.  It is only if we teach children that their successes and failures are representations of their character and personhood, then will they reflectively see any success or failure as their identity.  Arguably, if we teach children that failure and success are mere challenges, then-and-only-then, can we instill that failure and success are not reflectors of their personhood.

The lowering of the academic standards does not allow for an opportunity for academic growth and/or personal improvement.  If students do not learn the relevance of failure while in school, then they will learn the heartache of failure later in life.  Failure is capable of inspiring a child to perform better.    Without failure we cannot cherish our achievements and successes.  If we are not granted the right of failure, then we are denied the right to learn from our failures, mistakes, and errors in life.   Failure is neither a negative nor an absolute declaration of our identity or our lives.  Failure develops our character and our personhood!  When we fail, we should be motivated to work harder, seeking out the answers and solutions to solving our problems.

Failure is a perceptional outlook on a deed or act attempted.  Henry Ford said, “The only real mistake is the one from which we learn nothing.”  Are we not denying our children the right to learn from their mistakes?  For it is failure that pains the soul, but it is success that nourishes thy being.   Anyone who has had the right to fail has had the privilege of learning from their failures.  Failure not only teaches us what we have done wrong, but informs us that there is a better solution or outcome to achieve success.

BE INSPIRED BY THOSE WHO HAVE FAILED, BUT HAVE CHOSEN TO LEARN FROM THEIR FAILURES


“Life is a combination of positive and negative choices.”  (Brown, 2010, p. 17)  If we are allowed to reap the benefits of our successes and failures, then we will have a balanced outlook and perspective on our life.

“There is no failure except in no longer trying.”
~ Elbert Hubbard

“Success in today’s world is based on how much our kids know.” (Martin, 2010, Online)  Children will not strive to succeed if they are not encourage to perform at their ultimate best.  In a global market that is constantly changing and becoming overwhelmed by the political errors; it is critically important that children are prepared for academic success!

As a professor, I have been so discouraged by the large body of academic leaders and professors who are insist  that we pass students who have failing marks.  In recent years, I had a discussion with a psychology professor who declared that “there are no original thoughts.”  Furthermore, this same professor informed me that he would never fail a student, especially if they had placed a quote at the “beginning” and “end” of their paper.   My argument is, if there is no such thing as an original thought, then how were Steve Jobs and Steve Wozniak inspired to invent the Apple Computer, iPhone, iPad, etc?  If we longer have an ability to manufacture original thoughts, then how do so many of the Fortunate 500 Companies develop neo-technologies that are constantly being placed on the market today?  If there are no original thoughts, then why should we continue educating the students of today?

It is so frustrating to hear that a professor and/or teacher  “must” pass  students who cheat or fail to achieve a particular mark.   We are not only developing a society of mediocracy, but a society that is willing to pass students with questionable moral and ethical standing.

Please note:   While we are all susceptible to making egregious mistakes in life; it is less the mistake and more on how we handle the outcome of our mistakes.  The repentance and the act of contrition.  I have no doubt that we have all made mistakes in life; again, are we acting with due diligence to rectify our mistakes and errors in life?

It is a scary revelation that our society has become so complacent that we would encourage students to cheat, swindle, defraud, scam, dupe and fleece one another and the academic setting.  As a professor, it has been discouraging to have students who have cheated, but it is more frustrating that the academic setting provides allowances and shelter for those who defraud the system.

Media mogul, Ted Turner of the Turner Broadcasting Corporation has experienced failures, losses, successes and triumphs, but has never found excuse to give up.   Mr. Turner finds comfort in a statement his father used to utter:   “Son (Ted Turner), you be sure to set your goals so high that you can’t possibly accomplish them in your lifetime.” ~ Ed Turner (Father of Ted Turner).   Mr. Turner has expressed that this statement, alone, has been one of the major catalyst of his success.   Ted Turner has admitted that it has been the challenges in his life that have caused him to pursue excellence.

As a society, we should expect the best of our students, teachers, and administrators. “Success in any meaningful endeavor is marked by a history of high expectations that provide the challenge and inspiration necessary to press the individual to his/her highest level of performance.” (Ozturk & Debelak, 2005, p. 1)  Life is about encouraging growth, maturation and expansion of the mind, soul and body.  It is the very act of striving to learn that we expand our minds, thus allowing them to become more complete and the breadth of our knowledge more extensive.