“There should be no yelling in the home unless there is a fire.”
~ David O. McKay 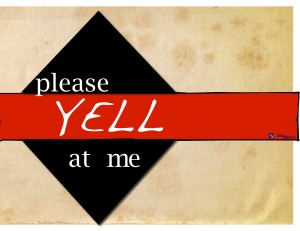 Have you ever experienced yelling?  Have you ever had anyone request to yell at you?   Have you ever requested to yell at someone else?  Why is it acceptable or permissible to yell at someone?  Why is it acceptable for  parents, children, teachers, coaches, conductors or instructors to engage in such a hostile act?  Why do we consider yelling to be less demeaning or violating, than other forms of corporal punishment (e.g. spanking, switching, flogging, or caning)?  Do we consider the perceivable and tangible act of spanking, switching, flogging or caning to be of greater violation?  Or do we consider yelling to have less damming effect?

Many parents and professionals agree that corporal punishment has an egregious effect on those who endure it’s wrath.  Moreover, yelling is a more acceptable form of punishment.  No one comes into this world having a full repertoire, or perfect set, of parenting skills.  A person’s range of skills and abilities will increase with time and lessons on parenting.  As parents, we all have an ability to grow and spread our wings.  Every parent is capable of learning new and improved ways of parenting.  There are no absolutes when parenting a child, but there are absolutes when considering the various methods of discipline.

Yelling has an ability of conditioning those who are receiving or engaging in the act.  It is the nature of yelling that makes it reflective of other forms of corporal punishment.  The intent of corporal punishment is to deliberately and severely correct, chastise, rebuke or reprimand another.  The complexity of yelling is its dichotomy of objectives.  Yelling can be used as a source of rebuke and  chastisement; it can be used as a source of expressing excitement, eagerness, and exuberance; and/or  it can be used to draw attention to a threat, risk, and/or communicate an emergency.   Let’s clarify, the yelling being addressed in this article has to do with the corrective form of discipline, punishment, or retribution.

While yelling has a positive element, yelling for the intention of discipline, chastising or mere punishment is a completely unacceptable act.

Have you ever been rebuked or punished for something you have done wrong?  Did the person use yelling as a source for correcting your behavior?  If so, how did you feel?  Did the yelling uplift your spirit, or cause you to feel dejected, humiliated and broken?  Yelling is the belittling of the soul and the very essence of the person.  Yelling is seldom a singular event.  People who choose to yell, frequently and repetitively use yelling as a form of conditioning another person.  The conditioning is being used in order to develop obedience or compliance of another.  Yelling in the corrective form is always unnecessary, excessive, and tiresome.

As a clinician, I have no reservations in saying, that yelling decays the human spirit.  It breaks the essence of the person receiving the vice, and it is unbecoming of the person enacting or engaging in the tantrum.  Yes, in most cases, yelling is a tantrum being propelled from one person and being received by another.   Yelling is one of the most reprehensible act of abuse.

Have you ever heard the following nursery rhyme?  “Sticks and stones may break my bones, but words will never hurt me.”