Please note that this blog article was written on November 16th 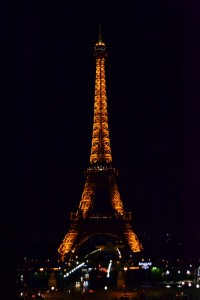 The title of this blog entry follows what I wondered as I came home on the TGV this morning. When the carnage began to unfold Friday night, I was hosting my therapist meditation group. It was only when my son-in-law who texted me to check that I was alright much later – he’d heard of me going to the Bataclan to see concerts many times before – that I had any inkling of war coming to Paris.

I turned on the TV and began to watch news coverage of what was a momentary hiatus in the bloody assault as I cleaned up plates from the potluck that we have after our blissful meditations. I thought, this is the essence of shock! Parisiens, in all variations from the “furthest away” of thinking that anything like that could possibly happen in our streets – were being pulled into something very awful of which only the first few dimensions were perceived.

Most of the restaurant killing had been completed but there were hundreds of hostages in the concert hall. I stayed awake as long as I could. Casualty figures were modest at 1am, but, I knew that when I woke, countless of those hostages would be among the freshly dead that Paris would mourn. When I had to go to bed I felt some nibbling guilt – for weeks I had had plans to catch up with an old friend down in Montpellier. I had a train to catch the next morning. Already, I wasn’t the slightest aware of the killing as it happened, and then when the rest of my Paris would start to reel, I’d be away.

This weekend, as I realized the randomness of who happened to be in the places where ISIS chose to slaughter, and felt amongst other things, political worries for what would come next, I yearned for many things. I wanted to have an expression of solidarity with those who lost their lives, their families and those who just felt the pain of the meaning of Friday night in Paris. I wanted to commemorate all of those who were unknown to me and to whom up until Friday were living their ordinary lives. I wanted to feel a little vicarious pain, imagine and connect with the loss, from all sorts of personal angles.

With the friends in Montpellier, amidst our ‘catching-up’, we shared on many aspects of the human side of processing. Sunday afternoon, when it was so beautifully blue skied, sunny and warm, I went for a walk, sat in the Parc de Peyrou and falling into a sublime moment of peace, felt no nibbling of guilt. Coming together as friends, as a group, as societies, to feel and to make gestures confirming our humanity is part of the meaning-making in the short term, I am sure. We Parisiens might do well to take our time here. Attempts to make more absolute meaning of Friday, November 13 in Paris, in what is the long, ideological war of attrition between opposite sides of the war on/of terrorism, (where civilian casualty and trauma is bountiful), might end up choosing anger and fear as the basis for a response…not that anger and fear are not understandable and rightful responses just now. So here then is my immediate decision to make meaning of weekend events over the longer term – I hope to be a ‘present’ force of humanity-confirming senses in the midst of crazy violence.

Trauma Counselling – Levels of Conversation – Part 1
During my PhD process and among the many texts I read; one book (unknown source) related to the field of depth psychology detailed the five levels of conversation – Formal Operations, Contact Maintenance, Standard Conversation, Critical Occasions and Intimacy. I found the content contained in each descriptor very helpful while learning about depth psychology and planning treatment goals while working with adult survivors of traumatic lifetime events (TLE). I found the descriptors so relevant to survivors within the post-trauma population that I decided to utilize content analysis of the entire text to create a 3 page, resource handout for use during psychotherapy. Unfortunately, I did not document the source on this resource material.

Over 20+ years has lapsed since this handout was created. With the advent of the www and my membership with the Depth Psychology Alliance (DPA), Canadian Counselling Psychotherapy Association (CCPA), and International Association of Counseling Hypnotherapist (IACH), professional associations; my hope remains to rediscover, properly and formally cite the original source (author and book title). If you are familiar with the content and know the source, please contact me at [email protected].  END_OF_DOCUMENT_TOKEN_TO_BE_REPLACED