Change is inescapable in life. It follows us wherever we go, and at each stage of our lives. Some of us are better suited to manage change than others, and some even thrive in times of transition. But for others, change can be a source of anxiety, stress, and discomfort. Sometimes we see change coming, and can brace ourselves for the fall out, or prepare ourselves so things can transition more smoothly. Other times it is unexpected or thrust upon us with little to no warning, and can leave us completely lost and disoriented. 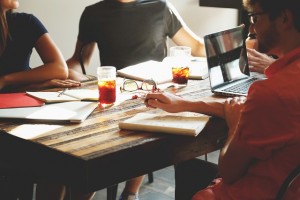 Students, no matter their level of study – whether they be undergraduates or post-docs – are under a great deal of stress and pressure. How can I as a career counsellor provide support and strategies to these students to help them manage the multitude of changes that will be thrown at them throughout their academic lives and beyond?

With the academic labour market such that it is right now, I am seeing an influx of clients who are transitioning out of careers quite unexpectedly. Many of the graduate students and post-doctoral fellows that arrive in my office, started out on their academic path with a certain goal in mind. They were going to be professors. They would contribute to an existing body of research and literature on their topic of specialization, and they would mentor, coach and teach junior academics to follow in their footsteps. The Canadian academic labour market has become increasingly saturated with PhD qualified academics, but vacancies for tenure track positions are becoming scarce. There are a slew of reasons as to why this is happening, and sometimes I will share these with the student, but that’s not really of importance at this stage. Providing an explanation as to why the labour market is how it is doesn’t do much to ameliorate the situation for the individual faced with abruptly changing the course of their career and life trajectory. Instead, I focus my energy on the individual in front of me, and the situation they are experiencing. How can I support this individual to cope with this transition, and develop skills that will hopefully allow them to navigate future transitions? Often I incorporate into my counselling practice the 4 S’s of Transition Theory as discussed by Goodman, Schlossberg and Anderson from their work titled “Counseling Adults in Transition (2006). I use this model to help guide the questions I ask and the direction that our conversation takes. END_OF_DOCUMENT_TOKEN_TO_BE_REPLACED

I seem to have lost track of my ongoing writing.  My last entry illustrated the use of re-framing in helping a client set goals.  There is a science, or perhaps an art to taking undesirable events and reframing them into something useable.  It is more than just looking on the bright side – but actually changing the content/tone/perceived intent of the event into terms that are workable for the client and, perhaps, the therapist.

I once had a client tell me – in reference to his over-zealous parenting approach – that parenting is just like “breaking a horse.”  Even though I am an Alberta boy, I knew nothing about breaking a horse and proceeded to tell this parent so.  I told him that he might as well be talking about training a dolphin as I don’t know very much about that either.  What I did know was that when training dolphins, the trainers don’t beat, scold, timeout, or withdraw any form of affection for not performing.  In fact, according to my rudimentary knowledge, the trainer simply rewards the dolphin with a treat for performing and step toward the desired outcome.  For example, if the dolphin were to touch it’s nose on a hoop – paired with a signal, it would get a treat.  Once that was successful, the signal would be given and the hoop raised and so on until the dolphin is jumping out of the water through the hoop to the signal.  In this case, the reward is a fish.

When dealing with troublesome behaviour of youth, it is rather unproductive to focus all of your energy on pointing out what the youth is doing wrong – believe me when I say they already know.  In fact, primarily all it does is set up a division between parent and youth.  Set a goal – decide the painfully smallest steps in reaching that goal and focus your efforts on rewarding the completion of the small steps.  If you’re having trouble getting your youth to attend school, go for a drive or a walk by the school, and if they happen to look at the school while you are going past, throw them a fish (figuratively speaking).  When they take a step toward the school, throw them a fish.  However, I wouldn’t recommend using a fish all the time.  A “good job” and a pat on the back go a long way – especially if most of your previous interactions have been fighting over the task.